The UBC Early Music Ensemble is a mixed instrumental/vocal ensemble specializing in music from the Medieval, Renaissance, and Baroque eras, with attention to aspects of historically informed performance.

The UBC Early Music Ensemble allows you to approach aspects of historical repertory and performance in an intimate, practical setting.

The ensemble features an exciting collaboration with the Pacific Baroque Orchestra and Early Music Vancouver: the Baroque Orchestra Mentorship Programme, under the direction of the internationally renowned conductor and harpsichordist Alexander Weimann. This initiative offers select students the opportunity to rehearse and perform alongside leading local and regional musicians, developing new skills and experiences that will enrich their training.

In addition, the course traditionally accommodates a variety of other chamber ensembles for strings, winds, voice, and keyboard.

In the Early Music Ensemble, you can access the School of Music’s extensive collection of period instruments and reproductions, including Baroque strings, violas da gamba, Renaissance and Baroque wind instruments, and harpsichords.

For Early Music Ensemble we encourage pre-recorded online video auditions. Only students who have not previously taken this course need to audition. Admission for new or continuing students is not guaranteed, and depends on the current needs and repertory of the ensemble.

Learn about auditions
Thank you for your interest in auditioning for our ensemble. Auditions are open from August to September.

The official course meeting times for the academic year are Mondays and Wednesdays from 1 to 3 p.m.

Most performance activity occurs on Monday afternoons, while a weekly informal seminar on historical performance practice will be held on Wednesdays between 1 and 2 pm.

Students are committed to rehearsing two hours per week only. Alternative rehearsal times can be scheduled if necessary.

Although students are encouraged to register early, final admission is by audition at the beginning of the academic year and will depend on the ensemble’s current needs.

Nearly every major city in North America and Europe is now home to a baroque orchestra playing on period instruments. Large-scale organizations including Toronto’s Tafelmusik, Boston’s Handel and Haydn Society, San Francisco’s Philharmonia Baroque, Montréal’s Ensemble Arion, and Houston’s Mercury Baroque have built themselves into major players in the cultural scenes of their respective regions. This success has created new and exciting opportunities for musicians and audiences alike.

Over the last few years, a critical mass of world-class musicians experienced in baroque period performance has also moved to the Pacific Northwest. This translates into a more active professional scene in this repertoire throughout the region. Their presence also creates a new opportunity for UBC Music students to be mentored by these musicians and enhance their training in baroque practice. Students who add this knowledge and experience to their resumes will see more opportunities to work professionally wherever they decide to live.

To this end, the UBC School of Music, the Pacific Baroque Orchestra (PBO), and Early Music Vancouver (EMV) established the Baroque Orchestra Mentorship Programme open to a subgroup of students enrolled in MUSC 157A/557, Early Music Ensemble (EME) at UBC. This initiative demonstrates the joint interest of the university and the professional community to partner for the benefit of students and the long-term sustainability of the local music scene.

How does it work?

The rehearsals will lead to end-of-term concerts in December and April, featuring students and professionals performing side by side. The EME and Mr. Weimann plan to recruit a select group of students to participate in the programme (and register in MUSC 157A/557 for the year).

The group consists of a core of string players (four violins, two violas, and two cellos) plus a harpsichordist; additional players, such as wind instrumentalists, might also join if the repertoire is appropriate. Baroque instruments and bows will be made available to participants.

Participation in the programme comes with a free subscription to both the Pacific Baroque Orchestra’s season and Early Music Vancouver’s new series: Baroque Masterworks at the Chan Centre.

The UBC School of Music is home to nine different small ensembles. They play in dozens of traditions and styles, from Bach to Balinese Gamelan, and everything in between. 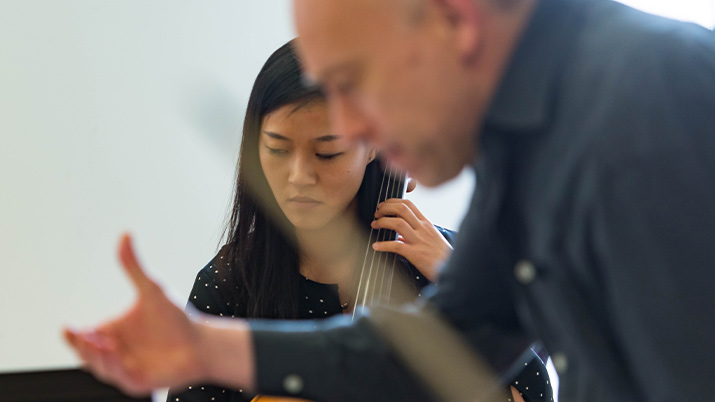