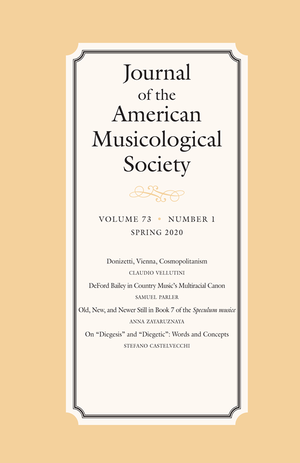 Abstract: This article examines the change in the Viennese reception of Donizetti’s operas in relation to the internationalization of the city’s theatrical life during the last fifteen years of the Metternich regime (1833–48), as well as the ensuing tensions between German nationalist ideology and the cosmopolitan aspirations of Habsburg cultural policies. While the transformation of Donizetti’s image from Italian to cosmopolitan composer resulted in part from the development of his career in Paris from 1838, it was also inseparable from evolving ideas of cultural cosmopolitanism in Vienna’s political landscape. As the Habsburg court sought to contain the dissemination of national ideologies in the Austrian Empire, the construction of a Viennese operatic identity was increasingly set apart from national discourses. In Vienna’s press, discussions of Donizetti’s two operas written specifically for the Kärntnertortheater, Linda di Chamounix (1842) and Maria di Rohan (1843), focused on the different ways in which these works combined Italian, French, and German elements, and aligned with conceptions of cosmopolitanism that advocated for the overcoming of national divides. Viennese attempts at reconciling operatic cultures, however, collided with the universalizing aspirations that German nationalists had reckoned as the mission of their own national culture. Charting the flow of ideas emerging from the Viennese reception of Donizetti’s operas for the Kärtnertortheater allows us to rethink the relationship between opera and politics in Vienna in the 1830s and 1840s, and to reconsider our approach to “national” designations as focal concepts of nineteenth-century music historiography more broadly.